All the metics of the World on the Place du Capitole

Our Forum is the first in the world Celebration of Languages (Fete des Langues) that puts into practice (presentation and promotion strategies) as well as uses in theory (Saussure, Benveniste, Meschonnic) cultural equality of all the languages of the World (including dialects, patois, “small” languages as opposed to the “big” ones, as well as the linguistic absurdities imposed by the politics) and thus:

- shatters the ideological foundations of all nationalism, ethnocentrism or racism;

- contributes to the creation of radical philosophy of cultural pluralism which is, as Felix Castan wrote, “the only message that could ever be accepted and applied by all the cultures in the world.”

The credit for having clandestinely forged the message goes to Occitan literature.

It is up to France now to haul the banner up and to make it its policy, both within and outside its borders, as it will never be able to find a greater or more magnanimous one.

Presentation of the Forum of Languages 2001, Toulouse 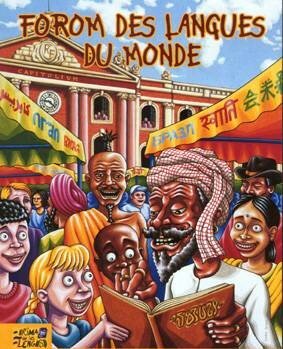 One can understand that the major international problems will not be regulated by nationalisms of the States, nor by the abstracted universalism, which is only internalization, universalization, of the Western models. They will not be solved either by the alliance of the citizens of the world, nebula of phantoms outside of borders, nations, and history, nor by the humanitarism or the well-intentioned (and economicist) anti-mondialism which deny historicities and thus specificities of each human community. Regional nationalisms, or those of the peoples without states but claiming one, are often the only answers, in form of dead ends, which the powers installed leave to the occulted communities. Nationalisms which always pass by claims of a linguistico-cultural nature more or less locked up on a reactive identity-program, facing the aggressions negations, and manipulated by the polical world. It is time to think to what could be, for all the communities, an identity-otherness transforming the relationships between the peoples and transforming these peoples themselves, in a logic of radical democracy and plurality. Only an international reflection, of
inter-communitary nature, on these problems will be able to achieve this goal. During a recent Forum, Henri Meschonnic spoke to us about a necessary Universal Déclaration about the Rights (and perhaps the duties) of Languages and Cultures, having to take its place beside the Universal Declaration of the Humans rights. There is already a Universal Declaration of the Linguistic Rights proposed by 66 NGO in 1996 which had the moral and technical support of the UNESCO. We are launching today the debate on this topic. It’s all the peoples which have to work on it.

On the basis of the Declaration of the Linguistic Rights referred to above, we will be working on our own contribution, before sending it to all the linguistico-cultural communities of the world, which will have to criticize it, the rewrite it, to enter in discussions between each others (all others) to formulate proposals and counter-proposals. Formidable building site, radically pluralist by nature, extraordinary arena for the most demanding discussion of all because questionning the
very essence of each community and of all of them at the same time. And the most formidable occasion of opening for all. First of all for France and for us because, while speaking to the others about their values, many are the French problems that we will not be able to hide to ourselves anymore !