This cross existed at Toulouse since a long time ago, during the roman occupation as well as during the Wisigoth era. In 419 AD the Wisigoths had chosen Toulouse as Capital of their kingdom

Alphonse-Jourdain, Count of Toulouse, was Raimon IV’s son. He founded the city of Montauban in 1144. His son succeeded him as Count of Toulouse as Raimon V. It seems that he did not use the Occitan cross during their sovereignty.

Raimon VI, Count of Toulouse was Alphonse-Jourdain’s grandson. He was a Hospitable Knight. He displayed the Occitan Cross on his seal during his entire reign and when he died, in 1222, he asked to be buried with his cross in Toulouse, in the House of his Brothers « Knights of Saint-Jean of Jerusalem » (Order of Knighthood of Malta) where he is still lies today

The different meanings of the Occitan Cross The Christ is at the center (« Sun of Justice », Saint Luc said) and the twelve balls are the twelve apostles. That is what the catholic priests  believed and said in the XIIth and XIIIth centuries.

It is the Heavenly Jerusalem of  the Apocalypse after Saint Jean, that is to say the mystic union of soul and spirit, the twelve balls symbolize the twelve gates.

The twelve balls could symbolize the twelve houses, or signs, and the yearly zodiacal cycle. This interpretation was adopted for the cross and designed on the ground of the Capitol square.

It could be also the four seasons of three months. Or the four winds, the four directions.

The meaning of the colors red and yellow

In fact, the real colors of the Occitan Cross are « Blood and Gold ».

Blood is the soul of Human beings and the gold is the melting gold : the sun, the Great Spirit or God.

In the Middle Ages, Spain was invaded by the Arabs. The Spanish people took war against the Arabs in order to free from the colonization. The general of the Catalonian army was Count of Barcelona. His coat of arms was painted in Gold (yellow). His army was seriously defeated, most of his soldiers and knights were either killed or seriously wounded. The Count of Barcelona was also badly wounded and was lying among the other knights. 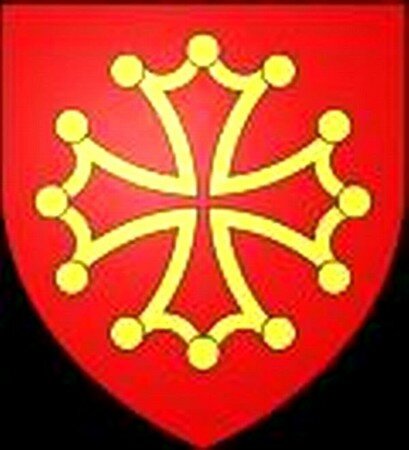 The General of the Moslem army was looking for him in order to know if he was really dead. If not he would kill him. The best way to recognize the Count was to find his Golden coat of arms. The Count was covered in his blood. He had the idea to dip his fingers of his right hand  into his blood and to draw four red strips on his coat of arms. As a result, the General of the Moslem army never found him and Count of Barcelona was saved. He was able to escape and built a new army. After that day his coat of arms became « Gold with four Guls-strips ». Later he went into battle with his new coat of arms and liberated his country.

As the Occitan people and the Catalan people are cousin peoples (like the Osage and the Omaha or the Ponca), the Occitan asked for permission to use the Gold and Blood colors for their Occitan flag which they considered to be the colors of Freedom, Equality and Brotherhood. That is why the Occitan Cross is Gold on Blood.

There is no copyright © to ask for make a copy of the Occitan Cross. It belongs to Humanity.

OC, In the Occitan language